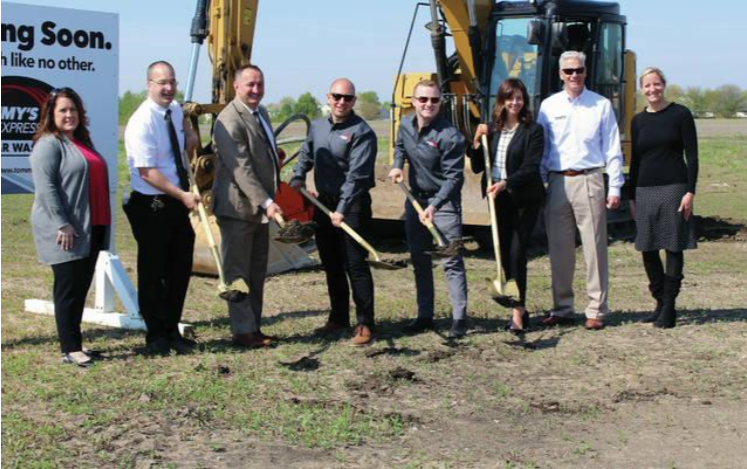 The Heart of America Group has broken ground on a new car wash in Waukee. Since starting in 1978, this organization has grown to include a portfolio mainly consisting of restaurants, hotels and other developments, making Tommy’s Express Car Wash one of the first of its kind for the family owned company.

“It started with my dad and I visiting a competitor in the search for ideas on an independent wash. One thing led to another and Tommy’s was introduced to us,” Heart of America Group Director of Real Estate Chris Whalen said.

Whalen credits Tommy’s Express Car Wash as being a leader in its industry, a characteristic that led the Heart of America Group to partnering with the company. In addition to offering an express exterior wash, the facility will also contain a license plate recognition system to admit member vehicles and a Tommy Transporter Dual Belt Conveyor system for faster and easier loading into the car wash bay.

Travel times through the wash tunnel are estimated to be less than three minutes. The car wash will also have self-serve vacuum stations available on location.

“We knew from the first time we saw one in action that they are leagues better than what is in the market today,” Whalen said, “The industry is changing very rapidly and Tommy’s is truly at the forefront of it. Their in-house engineering is second to none.”

Tommy’s Express Car Wash will be located off of Alice’s Road just south of the new IHOP Restaurant. Construction on the new car wash is estimated to take about six months with the goal to officially open sometime in the early winter.

“We are very excited to open our first business in Waukee. The city has grown so much, so fast, and they have done a wonderful job embracing it. I think the location speaks for itself,” Whalen said.