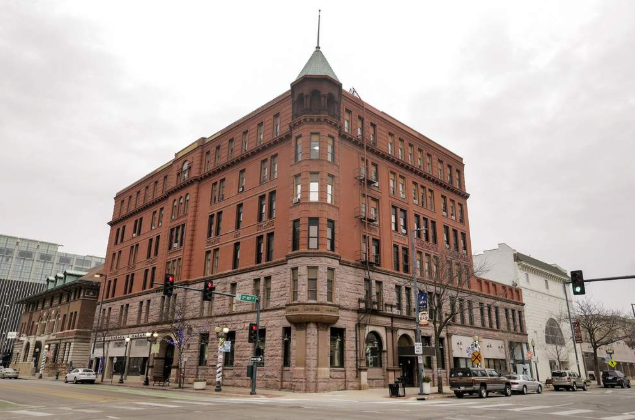 CEDAR RAPIDS — A landmark private investment to bring two new hotels to downtown Cedar Rapids has some thinking about what else is possible for the city’s core, but also raises some logistical questions — like where people will park.

The $51 million Heart of America Group project, which is expected to break ground this year, includes more than 162,000 square feet of space, upward of 200 hotel rooms and two new restaurants — a Johnny’s Italian Steakhouse and a rooftop lounge called the Republic, which are expected to attract customers beyond hotel guests. The hotels tentatively are under the Marriott brand.

In addition, a minimum of 50 staffers are expected to work in the facilities, which are planned for the Guaranty Bank Building and World Theater block at Third Street and Third Avenue SE.

Here’s how local officials and those connected to the project respond to the issue of parking:

• “Some parking will be provided with on-site surface spaces,” said Jennifer Pratt, Cedar Rapids community development director, who has helped negotiate public incentives for the project. “In addition, the developer will be working with ParkCR on utilizing existing city ramps for valet service.”

The downtown district does not have a parking requirement in order to minimize curb cuts for driveways and encourage consolidation of parking to specific locations, according to the city’s zoning code.

• “There’s three parking decks within a block and half, so there’s a lot of parking spaces there,” said Mike Whalen, president of the Heart of America Group, which has its headquarters in Moline. “Other than on certain event nights, I understand they sit relatively empty after 5:30 p.m. Obviously times with big events there’s going to be a parking push.”

He noted that parking needs per hotel room are declining as services such as Lyft and Uber become more popular, and said a Heart of America Group hotel in downtown Des Moines requires just .62 parking spaces per hotel room, so the parking demand may be more limited than it seems at first glance. Still, he acknowledged the two restaurants could create additional demand for parking.

The project still is in its design phase, so Whalen did not have a count of how many on-site spaces there will be.

l “The good news is there is access to four different parking structures with 2,600 spaces in the area,” said Jon Rouse, general manager of Park Cedar Rapids.

The convention center and Third Avenue ramps would be closest, followed by the Five Seasons and Fourth Avenue parking ramps.

During conferences, concerts and other large events, the supply of parking spaces could be squeezed, but Park Cedar Rapids has strategies to help manage the demand. Examples include proving incentives use outlying parking facilities; capping public use spaces; communicating with hotel staff about hotel occupancy numbers on a given night; and directing guests to specific parking lots.

“We can plan on upward of 200 to 300 additional spaces that we don’t have heartburn over,” Rouse said. “Even if the number was pressed higher, we can do some clever things to make room.”

Rouse said the increased evening demand also could give the parking organization a revenue boost to address maintenance at the Five Seasons Ramp and other needs elsewhere.

• Cedar Rapids City Council member Dale Todd, whose District 3 includes downtown, said he has no concerns about strains on parking and rather sees more demand as a good thing.

“Building parking ramps is something cities do and if we have more growth downtown it would be obvious we would do something like that,” Todd said. “Do you want to grow your downtown or maintain the status quo?”

Another question has been what competition from the Heart of America project Group will mean to the city-owned DoubleTree by Hilton Hotel nearby. That hotel is profitable, but its revenues help offset losses at the U.S. Cellular Center and convention center, city officials have said.

• “When new room supply is added to your immediate market area, it often has an impact on the business,” said Jay Anderkin, general manager of the DoubleTree. “In this case, the new supply will open some new opportunities for us and we expect the overall impact to be positive.”

Because the DoubleTree is part of a complex with 80,000 square feet of meeting space along with the arena, the Doubletree’s 237 guest rooms can’t alone draw enough people to fully pack the space, he said.

The convention center complex expects to try to lure larger events thanks to the Heart of America Group hotels, he said.

“Actually, we will start introducing these hotels in our advance sell efforts very soon,” Anderkin said. “Of course, we will not sell that space 365 nights a year, so chances of some down periods within the year where the impact is not positive is possible. It will be up to us to work with the new hotels, our existing partners and the tourism office like we do today to bring visitors to the area.”

• “Many conventions and sporting events have minimum guest room requirements within a certain distance of the event,” said Pratt, the city’s community development director. “Heart of America’s additional guest rooms will increase the number and size of conventions and events for which the city can compete. The goal is to increase the number of overall visitors to the downtown.”

She said the expectation is that both hotel groups see strong demand.